Are you addicted to skiing? Take this easy test!

Are you addicted to skiing? Take this easy test and find out!

So we're starting to get some halfway decent early season snow on the North Shore ski trails. In some places, the groomers are even out fixing up ski tracks. Just how committed are you to cross country skiing?

Do you apply storage wax to your skis in the spring?
A) What’s storage wax?
B) No I just leave on whatever goop I last used.
C) Duh, you think I just let my skis dry up over the summer?

What’s the bare minimum amount of snow you’re happy to ski on?
A) Two feet and soft enough to be poofy when I fall.
B) Two inches, but it has to be a thick two inches
C) As long as the ground is at least half white.

What sort of goal do you have for skiing this winter?
A) Get out on my skis at least once.
B) Ski at least once a week, as long as there’s snow.
C) Not sure yet, but it’s measured in the hundreds.

Thanks to the blogger Mikel from Caribou Highlands known online as "Voice of the Mountains" for the top five list of reasons to "Shore it up" for Thanksgiving. My favorite is reason #3, "No Black Friday". As the writer puts it, "There’s plenty of other chances to get trampled at a shopping mall."

I covered last year's Grand Marais Black Friday in a post here. Basically, it's another busy day in Grand Marais. No doorbusters. No five a.m. openings. The narrow aisles in Joynes are as crowded as ever, with stacks of Carhart pants threatening to fall on the stacks of Woolrich shirts as they compete for your holiday dollars. Yes there are sales, 10% off here, 20% off there. But no one will get trampled looking for a deal on Ragg wool socks.

The real fun of Black Friday kicks in at dark, with the Grand Marais Christmas Parade. Where else would you find a Christmas event themed "O Ole Night"? In what Twin Cities mall would you be encouraged to wear your best goofy Christmas sweater and join in the Uff Da parade? Only on the North Shore.
Posted by Andrew Slade at 6:49 PM 3 comments 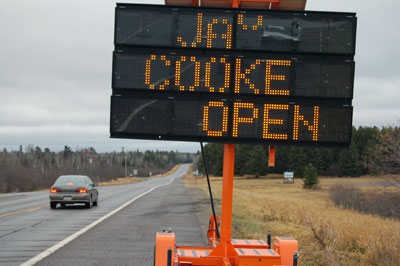 Jay Cooke State Park is a sprawling North Woods landscape etched in intricate detail by the St. Louis River. This last summer, the river rose out of its banks in Duluth's 500-year flash flood and gouged the park into pieces. The park will never be quite the same. But with a few detours in mind, park visitors can still have a great Minnesota State Park experience. 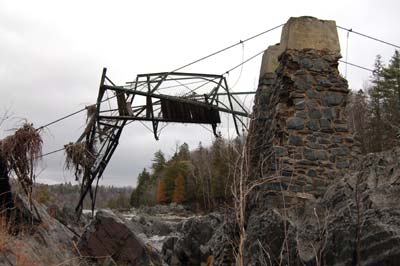 Long story short, the flood cut the park up like a Thanksgiving pie, into four big pieces. It was cut north from south, and west from east.

The flood closed off the park entirely for about three months. Now,  the entrance from the west (from I-35 through Cloquet or Esko) is open again. If you think of the cut-up pie, you can easily reach and explore the upper left (or northwest) quarter of the pie.

The park has a great map available showing what's open and closed.

In our book Hiking the North Shore, we feature two hikes in Jay Cooke State Park. Hike #1 is Silver Creek Trail and Hike #2 is St. Louis River Loop. Those trails themselves are still in good shape, except both hikes require crossing the Swinging Bridge. With the bridge closed, you can still hike down the south side of the St. Louis River from Thompson starting on the Munger Trail, then do the Silver Creek Trail loop and return the way you came.

Looking ahead
Plans for the 2012-13 winter cross country ski season are still being worked out. There will definitely be ski trails groomed in the area around the Visitor Center. Our book Skiing the North Shore describes the following trails that will be open: CCC, White Pine and Thompson. The Oak and Triangle trails reached off the East Palkie Road should also be open and groomed. Then there is hope to open some of the trails on the south side of the St. Louis River using local access points; more details to follow.

The park plans to have the Swinging Bridge open again in late 2013. That will allow hikers and skiers full access again to the trails. The massive blowout on Highway 210 will have a new bridge by 2014. Two years from now, Jay Cooke will be all put back together again. Until then, enjoy the park all that you can!
Posted by Andrew Slade at 3:34 PM 0 comments

Take 200 skiers, hikers and climbers out of their funky North Woods cabins. Dress them up in wool and recycled nylon. Send them for a night out at the movies. Pack them all into a high school auditorium and show them films of beautiful wild places and crazy outdoor adventures. That's the annual Banff Mountain Film Festival event in Duluth, and it's happening again this Sunday and Monday, November 18 and 19.

This is a seriously special event for Duluth:

Like November snow, it's totally fresh
These films are the winners from a festival in Banff Alberta that just wrapped up a few weeks ago. Duluth is about the third stop on a world tour that will reach 40 states and nearly 40 countries. There's even a showing scheduled for Antarctica.

The great films are for a great cause
The Banff Festival is also the season kick off for the Duluth XC Ski Club, an amazing group of volunteer ski enthusiasts that are making great progress improving Duluth trails and grooming.

You can experience the thrill of the unknown
The films that are screened Sunday night will be completely different from the films screened on Monday night. When you show up, you don't really know what you're going to see until it's announced from the stage.

If you go
First, buy your tickets ahead of time. The festival will sell out. Tickets are available at the following Duluth shops:Vertical Endeavors, Trailfitters, Ski Hut, Duluth Pack and Continental.

The event opens at 5:30 and the films start at 7:00. It's not just films, but also displays and socializing and a great raffle.

Be there. And be there again.
Posted by Andrew Slade at 10:22 AM 0 comments 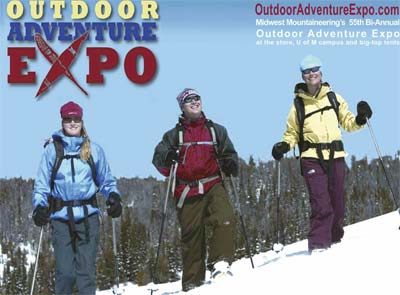 What do you get when you cross a canoe and a snowshoe? The "X" in Expo, that's what. As in the twice-a-year Outdoor Adventure Expo.It's this weekend, November 16-18, on the West Bank near downtown Minneapolis. This is the winter version (hence the snowshoe). There's a summer version every spring (hence the canoe).

Every spring and every fall Midwest Mountaineering in Minneapolis puts on the biggest outdoor show of the season. It's coming up this weekend, and if you're at all interested in exploring the outdoors this winter, you should get there.

It's shoulder-to-shoulder fun. Midwest turns all their parking lots into tents and all their spare rooms into classrooms. 80 free programs, a whole circus tent full of exhibitors, and merchandise galore. 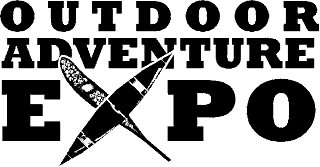 Great programs
For you fans of the North Shore, there are some great, unique programs you should plan your visit around. If you go on Saturday, which is the biggest, busiest day, you can :
Get an Introduction to Snowkiting
Learn about Great Places to Snowshoe in Minnesota, Wisconsin and the U.P.
Check out The North Shore: Winter Photo Essay
Brush up on Winter Camping: The Basics

If you can only get there on Sunday, you can make the coolest program of the weekend, The North Shore: Skiing the River Canyons. If you go, say hi to Rudi for me.

Great exhibits
While the programs are fun and informative, my favorite thing to do is to go through the exhibitor area and talk with folks. I learn something new every time, whether it's a cool new piece of gear or an important new environmental concern.

Great food all around
If the grilling and brewing inside the tent isn't enough for you, just step outside the Expo and you're on the West Bank, with restaurants of every nationality from Ethiopian to Mongolian.

I do hope you can make the trek to the Expo. It's the best North Shore day you can have if you can't actually be on the North Shore.
Posted by Unknown at 8:01 PM 0 comments