A pirate ship on Lake Superior 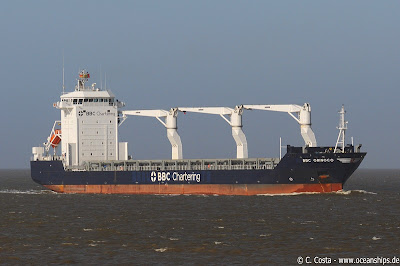 It was a scene right out of Pirates of the Caribbean. The efficient crew of the salty ship left the harbor at first light and was seen sailing away into the sunrise. At 6:00 AM today, the BBC Orinoco slipped through the Duluth Lift Bridge and headed out to safety. No pirate attacks in this harbor.

The ship was the BBC Orinoco, and the crew had good reason to fear pirates...they and their good ship were attacked by pirates just six months ago, as they sailed the Arabian Sea.

It's a great story. Pirates boarded the vessel. The crew retreated to their onboard citadel, where they were safe from the pirates, and called the Indian Navy. The Navy sent in commandos, rousted the pirates, and the ship was free to continue.

Here's a quote from Pakistan Defence:
At daybreak, the naval forces, which had arrived at the scene, commenced their actions. MARCOS slithered onto the merchant ship from a Sea King helicopter and took the crew, who were locked in compartments, to safety, while the helicopter provided air borne fire support. The merchantman was boarded by naval personnel and a thorough search is currently in progress. The ship will set course for its destination once the boarding party reports all clear. Although no pirates remain onboard, implements such as crow bar, knives etc., were found aboard the ship.

Plus the ship just drips with international intrigue. It's registered in Antigua. The crew is from the Ukraine and the Phillipines. It's owned by Germans. The name Orinoco is a river in Venezuela and Colombia, and is the subject of song from Irish singer Enya.

Posted by Andrew Slade at 9:20 AM 0 comments

Summer is on the way...from Arizona 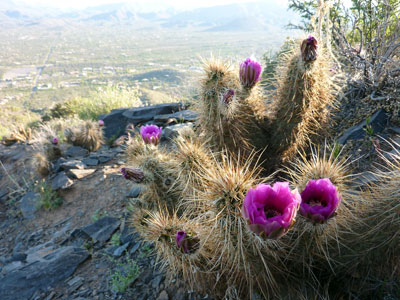 Yes, it seems like winter is here to stay. People are still skiing on North Shore ski trails. Dry, fresh snow just fell on Sawbill Lake. But I can tell you, summer is happening, only it's a thousand miles away. 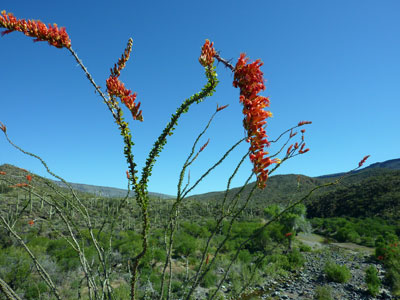 I just got back from a week in Arizona, in a little town north of Phoenix. We did some hiking and some hanging out by the pool. Temps were in the high 80s every day. The cacti were blooming like wild. The ocotillo plant, normally a dried-up stick of a shrub, was covered in green leaves and blooming a flush of orange-red flowers. 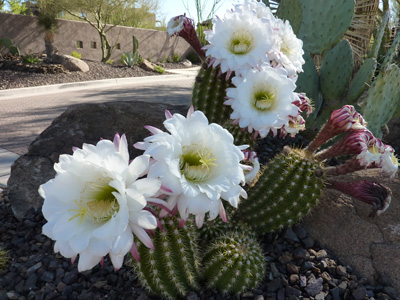 The biggest blooms were on the saguaro. Saguaro are those super-tall cacti with the arms sticking out and up. They define the Sonoran Desert sort of like how the white pine define the North Woods.

So North Shore folks who have had bit too much winter, take heart. The seasons are changing; the earth is tilting toward the sun. The maple woods will fill with spring beauty. The loons will return to our lakes. Sometime before August, you'll actually feel hot.

Summer is on the way.
Posted by Andrew Slade at 10:19 AM 1 comments 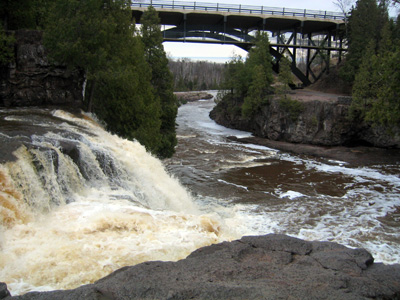 North Shore waterfalls are raging with spring melt right now...it's a great time to head to Gooseberry Falls for a hike!

One of the very best waterfall hikes in my new book Hiking the North Shore is the Five Falls Loop at Gooseberry. It's a 3.0 mile hike that I rate as moderately difficult. The loop takes you from the park visitor center up the west side of the river and down the east side. You get a great look at four falls: 1) Lower Falls, 2) Middle Falls (the most popular tourist destination), 3) Upper Falls (pictured above), and 4) Fifth Falls. 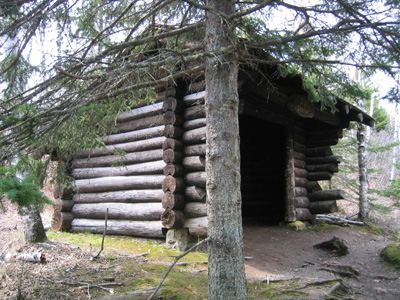 Go for a hike!
Gooseberry Falls State Park is 13 miles northeast of Two Harbors on Minnesota Highway 61. For this hike, park at the free main visitor center and wayside rest parking lot. Stop at the park office for a map and directions.

The hike starts at the park office and heads up under the Highway 61 bridge. Along the west side of the river, you'll be hiking on a fairly rough trail that cuts close to the river bank. There's a nice log-sided trail shelter along the way. You'll follow a tremendous bridge across the gorge of the Gooseberry River just upstream from Fifth Falls, then you'll be on the Superior Hiking Trail back down to Highway 61. 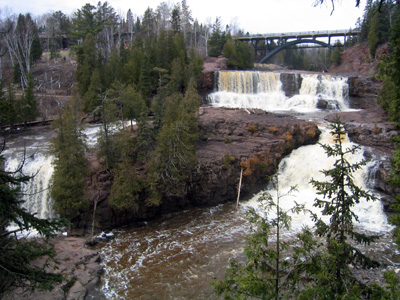 Once you cross back under the highway bridge, you'll follow the park's Falls View Trail in a grand circle of the three main falls, with sweeping views from above and below.

A lovely hike on a lovely trail, especially when the spring run-off is raging!
Posted by Andrew Slade at 2:36 PM 2 comments

North Shore rivers are at their peak! 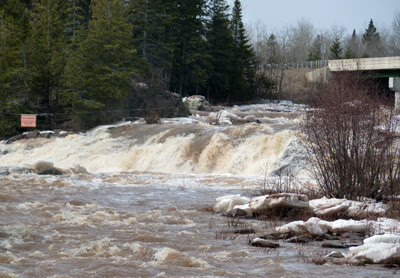 North Shore rivers are still running high. It's a great time to visit your favorite waterfall and see what it looks like in full flood.

The peak flow time on North Shore rivers moves from Duluth up the shore. Above is First Falls, on the Knife River, from a few days ago just after the ice went out. Remote gauges show that the run-off peaked on April 10. , the day after I was there. It's easy to visit this falls, just pull off the Highway 61 Expressway and turn into the wayside rest area. You'll hear the falls upstream about 60 yards, and there's even a paved walkway to a viewing area. 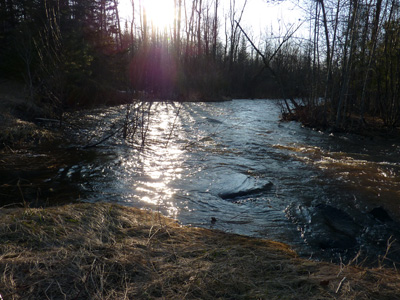 The Sucker River seems to have hit its peak a few days ago and is starting to come down again. But when I was there on Tuesday afternoon, a good four miles upstream from Lake Superior, it was running so high a good kayaker could have paddled down it. Normally this stretch (just off Ryan Road) is just a trickle.

Moving up the shore, stream gauges seem to show that the Poplar River is at or near its peak. But just to be sure, check out this video showing the Cascade River two days ago:


Check out a North Shore river this weekend!
Posted by Andrew Slade at 12:39 PM 1 comments

North Shore waterfalls on the web

Right now, all that snow that fell onto North Shore ski trails is melting fast and flooding down to Lake Superior, turning trickles into torrents and making the great waterfalls in our North Shore state parks even greater.

If you'd like to track just how much water is raging down the North Shore streams, you can check out these web links to real-time gauges on select streams.You'll see a graph looking something like this, the hydrograph for the St. Louis River over the last two weeks. 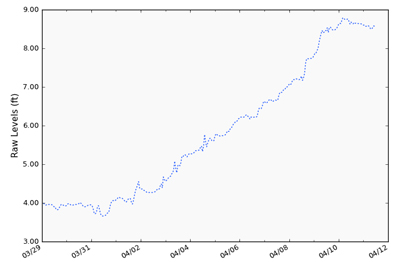 Enjoy! And stay safe out there!
Posted by Andrew Slade at 2:04 PM 0 comments 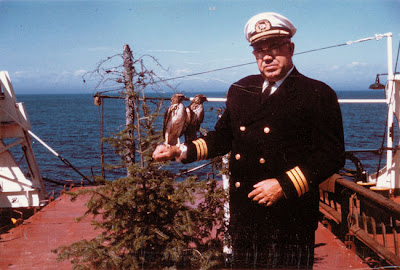 If you are a nature geek like me and if you love Lake Superior like I do, there isn't a better story to hear than this one from Sparky Stensaas and Lake Superior Magazine.

It's an amazing combination of birdwatching and shipping, of citizen science and Lake Superior geography. From the discovery made by a Duluth remodeler and his elderly client to the pages of Audubon magazine. The crux of it is Captain J.P. "Perk" Perkins, an avid birdwatcher and ship captain who set up a miniature forest on the deck of his laker and monitored the birds that found refuge there as they crossed Lake Superior. Along the way, he discovers unknown migration flyways and rewrites Midwest ornithology.

Sparky is a great naturalist and photographer, with an ear for a great story. I had heard parts of this discovery in the past, and am so glad Sparky was able to put all the pieces together.
Posted by Andrew Slade at 7:26 PM 0 comments 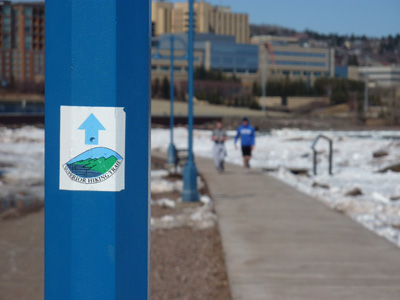 Although most of the hiking trails of the North Shore are still buried under feet of snow, one stretch of the Superior Hiking Trail is clear and ready for hiking. The Downtown Lakewalk, one of 50 day hikes featured in my new book Hiking the North Shore, is open and mostly dry for walkers along its whole length.

From its trailhead at the Marine Museum all the way to Leif Erickson Park the Lakewalk is also the route of the Superior Hiking Trail. For current conditions on the SHT, check the website of the Superior Hiking Trail Association. It's going to be a late spring on the trail, with lovely muddy waterfalls lasting well into May. Stretch out your legs on Duluth's Lakewalk and get ready for hiking!
Posted by Andrew Slade at 6:02 PM 0 comments

Officials cited the geographic reality that has been ignored for a long time. The Minnesota shore of Lake Superior really is on the northwest side of the lake. "This historic moment will finally clear up centuries of confusion," said David Thompson, Jr. "Minnesotans never knew if they went north or east to Grand Marais. Now they'll do both."

Secretary of State Danielle Webster agreed that the move will solve long-standing confusion. "Anyone who has been past Thunder Bay knows that the true rugged and wild North Shore starts around Nipigon."

Representatives of Minnesota businesses have expressed concern about the plan. Explore Minnesota's Alex Ashburton said that over forty tourism-related businesses now called "North Shore" will either have to relocate to Ontario or change their names. Tofte's only grocery store and liquor, formerly known as North Shore Market, has already changed their name to "Northwest Nibbles and Nips."