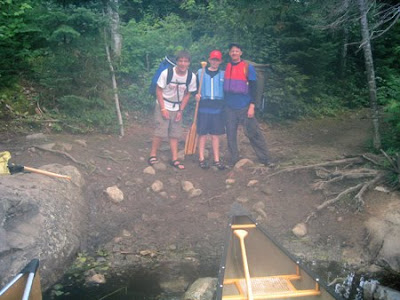 It was a dark and stormy night...

It was a dark and muggy day. Three first-time wilderness trippers and one tired old guide were on their third day already, six portages past puddly bogs from Disappointment Lake to Ensign Lake. It had been wet, but more to the point it had not been dry. Just because it doesn't rain doesn't mean you stay dry. The sky hd been a deck of clouds for days. Humidity and canoe bottom bilgewater gets into everything. "Dry" clothes. Camera lenses. The "powdered" milk. No sun to dry them out.

The tired old guide had slept in his swimsuit the night before, ironically the only thing that was dry. The passion for cliff jumping among 13-year-old boys took the the Tired Old Guide---and his once-dry underwear---by surprise. Did those boys actually take a canoe out on their own to scout jumping locations from our campsite on Ahsub Lake? Still, the Tired Old Guide was NOT going to borrow dry undies from his son. 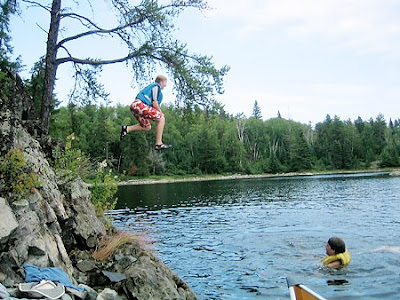 The day was in August, the bugs were supposed to be gone. And there the bugs were, along every portage trail, ready to swarm. Yet the three first-timers made it through. It took them headnets. And an ample dousing in Off at the start of each carry.

Seeing the smile on his son's face at portage's end, despite the heavy food barrel on his back, the Tired Old Guide realized that while the camera was fogged over, his underwear were, finally, dry. Life in the wilderness could go on.
Posted by Andrew Slade at 12:54 PM