Ski season's over: when will I get it? 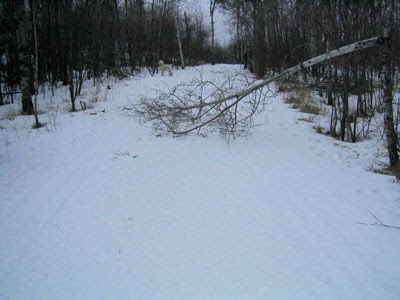 What will it take for me to get the message? THE CROSS COUNTRY SKI SEASON IS OVER. FINIS. FERTIG. KAPUT. 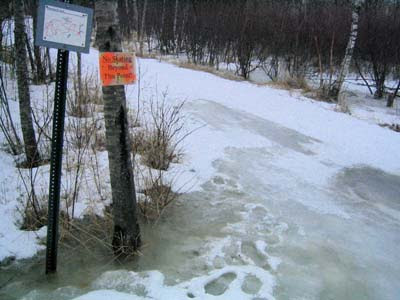 Maybe I should take a closer look at the FROZEN PUDDLE here at this trail intersection. The orange sign says "No Skating Beyond This Point," and IT DOESN'T MEAN ICE SKATING. DOOFUS. It means NO MORE SKIING BEYOND TODAY.


...aren't those two little parallel tracks there on the side? They are white, aren't they, which at least means they're not mud. A guy could ski on ice, if that's what it is?

I still have the ski racks on the roof of the car. I'm still reading SkinnySki. And they're saying good things about ski trails at Giants Ridge. I could still go...


...and I just thought I heard the weather guy say it might snow next week...

Just to clarify a bit, for the astrologically inclined: I am a Gemini. 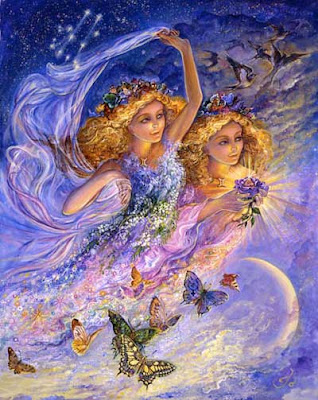 I am pathologically wishy-washy. I want it all. I deny the evidence in front of me. They say "Geminis will take either side of an argument, not because they feel strongly about their position, but simply for the fun of it. They are adaptable and flexible, and require numerous amusements and interests at once to satisfy their quick, changeable minds."

I call it Adult ADD. My favorite words are "however", "although" and "maybe."

I'm not ready for ski season to be over. Maybe. However, I might go downhill skiing tomorrow. Although Giants Ridge is tempting...
Posted by Andrew Slade at 4:55 PM

Pincushion has an 18" base still with a fresh 1" of snow last night. They cleared the storm damage this morning and are Pisten Bully grooming tonight. Should be really good skiing all weekend.

You know that scene in Star Wars II/V, when Darth Vader lets Luke know that "I am your father"? And Luke screams "NOOOOO!" That's me, when I know there might be good skiing up the shore.

And after you finished screaming "NOOOOO!",
drive 2 hours north did you, young Skiwalker?

Not so fast!
Jennifer at the Spirit of Gitchee Gume in Little Marais says it's snowing at a good clip. Maybe you're at Sugarloaf for the Saturday morning whatever program. We're in Woodbury.

As for Gemini, look on the bright side. You have every option at your disposal. You are the perpetual student, but also the teacher.

I have Venus and Uranus in Gemini. The rebels demand freedom, question everything, analyze to death, and then Venus acts on instinct. Do it anyway!

Geez, guys, thanks for the support. NOT. I'm trying to wean myself from skiing and you're like the bartender selling to the alcoholic.

I admit that I am powerless over my desire to ski.

And I admit that I might be on the road on Monday morning to someplace snowier.

It is your destiny young Skywalker.