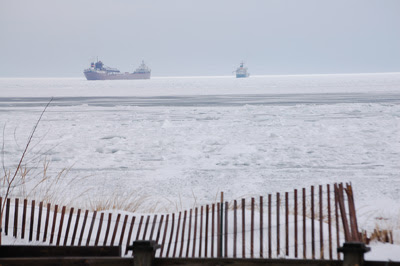 In many springs, ice piles up at the western tip of Lake Superior, as the big ice pack breaks up and easterly storm winds smash it in. I don't know why, but I get a kick out of watching lake boats get stuck in that ice.

Yesterday was a classic display of shipping hubris. I define hubris as "pride before the fall." Or another definition: "guys about to do dumb things." Like George Bush right before the Iraq war. The captain of the Lee Tregurtha headed out yesterday morning. We can hear the horns of the ships and the bridge as the boats pass under the Lift Bridge. Sure enough, in a few minutes the boat came into view off our back yard. And then it stopped.

Ice is just water, right? We can stir the ice cubes in our water glass, why can't our huge ship move the ice chunks in the lake? Because the lake is the boss. Because you can't mess with months of cold weather turned to ice, and the shoving power of Lake Superior winds.

So the Coast Guard boat Alder comes out and tries to free the Tregurtha. For hours. 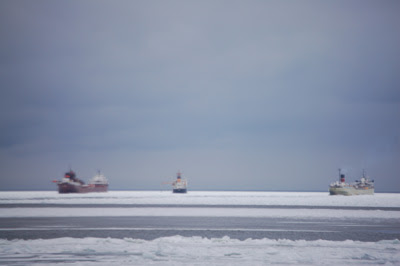 Then comes my favorite part: the Alpena comes out, a bit to the right of the Tregurtha, rams the ice, and gets stuck too.

It reminds me of guys trying to push a car out that is hopelessly stuck in a snowbank. Or guys trying to crush beer cans on their foreheads, just because other guys are doing it. It's like every comedy routine Chris Farley ever did. If one guy can't do it, let another dude try. And fail.

There are way better photos of the whole thing from the Duluth News-Tribune. It helped them to have an airplane.

Was it the Alder's mighty diesel engines that finally set them free? No, it was the wind, which shifted to the west and spread the ice floes back out. What nature has wrought, nature will undo.

Guys do dumb things all the time. In this case, no one got hurt, and we got to watch it all unfold. I like that.
Posted by Andrew Slade at 7:52 AM

As true now as when it was written
moments ago.