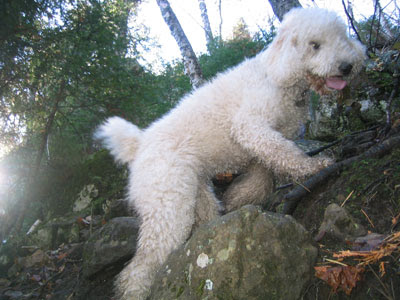 For the last of my 50 North Shore hikes, I almost left the dog at home.

Chloe, the psychotic standard poodle, had accompanied me on half of my hikes so far, and she loved every one of them. Since I generally hike in the off-season and in mid-week, I feel okay letting the dog off the leash. Chloe, of course, feels great about being off leash, romping and spinning around.

So for old time's sake and because, well, she insisted, she made this last trip.

We call Chloe a woodle, because when she gets out in the wild woods she is more wolf than poodle. Half wolf, half poodle = woodle. Of course, for every mile I walk, Chloe probably does three miles, running ahead and sprinting back. Even the steep climb of the famous "Drainpipe" didn't deter her from scaling up and down a few times. Hiking the big backcountry loop through Tettegouche was 11 miles for me, so it would have been nearly the distance of a marathon for Chloe.

After ten miles of hiking and seeing no other person or dog, there was a scary moment. We were on our way back to the trailhead, making good time on the flat, wide ski trails. I cruised around a turn, and all of a sudden saw the waddling form of a porcupine. Going our direction. Taking his own sweet time right down the middle of the trail. 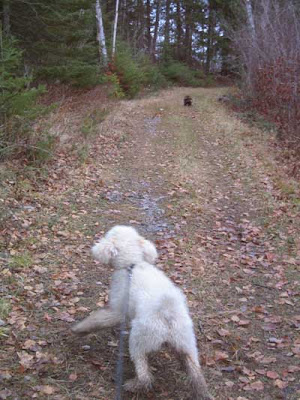 Fortunately, I saw it first. I was able to get Chloe back on the leash. A moment later, Chloe spotted the waddling thing. Time to play! It's moving, and it's moving away, so it must be time to play chase!

The dog had already Velcro-d up half the burrs and twigs in the park. The last thing she needed was a muzzle full of quills. But the porkie was right in the trail, headed our way. We would have to follow it until it finally got off the trail. This is dog torture, keeping the poodle away from its potential playmate. Chloe pulls at her collar until it squeezes her neck and she rasps and wheezes.

About 300 yards of waddling and wheezing down the trail, porcupine and dog separated and we were able to move along.

The last mile of the trail was as muddy as anything I'd seen all day, and Chloe was in her glory. Knowing that the hose at home had been put away, I stopped in Two Harbors at the "Lil Dog Car and Pet Wash." For two bucks in quarters, Chloe got a good rinsing and a vacuum. 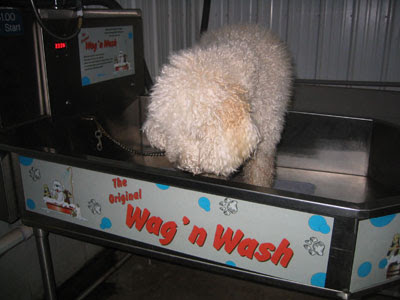 A week later, we're still pulling seeds from her fur, but at least we're not pulling quills through her cheeks.

So, okay, I'll admit it. I like my dog. A bit. She's alright. I appreciate the company. She hasn't destroyed anything of mine for months.

I've been asked if I'll dedicate the book to Chloe. Absolutely not. But she's a big part of the book, for sure.
Posted by Andrew Slade at 9:37 AM

Chloe is such a cutie!

And a doggie wash.