Bears and bozos: On the noisy side at Tettegouche

As an author, I really enjoy hearing from readers and getting their feedback about North Shore experiences. Thanks to Linda Borrell, who wrote to me to share some concerns about her campsite at Tettegouche State Park. She stayed in the cart-in campsites in the Lake Superior Campground, which I highly recommend in my presentations. However, she had two problems: noise and bears. 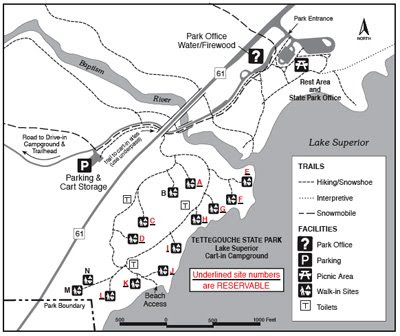 "We just stayed at Cart-in B at Tettegouche, cleaning up after some campers who thought the site was for partying with their alcohol beverages in a secluded area...spent a couple of hours cleaning up after them.....disgusting how some people treat their state parks....Anyway, we found the site to be nice, except for the traffic. It never stopped and the noise was loud usually from 9am-10pm. Don't know if you are going to write an edited or expanded version to your book, but that would be great."

Tettegouche State Park is a wilderness giant, full of remote and beautiful places. The cart-in campground has some lovely campsites right on the Lake Superior shore, with secluded cobblestone beaches and no sound but the crash of waves or the cry of herring gulls. It's more wild and more "North Shore" than the traditional drive-in campground a mile or so inland on the park road. Here's Cart-in E, perched above the mouth of the Baptism River: 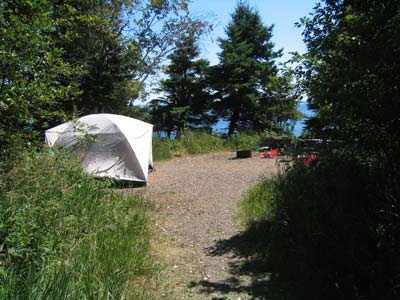 However, as Ms. Borrell experienced, some of those cart-in sites can be noisy. Sites A-D are quite near Highway 61. To make matters worse they are tucked into a hill that will reflect the sound of highway traffic back to you, like a natural amphitheater. The very pleasant campsites E-K are on the other side of the hill. I especially recommend site F, J, and K, as they have their own little beaches.

Ms. Borrell elaborated on her story in a second e-mail:

"One thing I forgot to mention....I camped in Cart-in B on Friday by myself, waiting for my two companions to arrive Sat am.... I woke up on Sat at 7am and got out of my tent. Since I was by myself, I stretched and gave a big, loud yawn- only to meet the eyes of a bear, not 15 yards from me.

"I froze, the bear froze and then I ran back to my tent, put my jeans on and headed into Silver Bay for breakfast. (I wasn't about to make bacon and pancakes at the campsite!). At the cafe in Silver Bay, I talked with the police chief, who was also having his breakfast...he told me never to stare at a bear and to make as much noise as possible. He told me to go next door to the hardware store and buy a whistle or bell.

"So I did. It makes for a fun story, but I am dismayed at my reaction when I saw the bear; I did all the wrong things. My clue should have been to pay attention to the bear droppings at the beginning of the cart-in trail!"

Thanks for the feedback, Ms. Borrell. And special extra thanks for cleaning up after the boozy bozos. The grungy campsite actually attracts bears, so you helped to solve a bunch of problems all at once.
Posted by Andrew Slade at 9:33 AM

The campsites in the cart-in campground can be noisy in the spring. All the leaves are not on the trees yet, so that makes it a little louder.

Sorry about the mess the folks left before you. They are the numbers who make up the 1-2% we usually remember in State Parks.

We do not charge any extra for the wildlife adventures in our park. Priceless! Personally, I have not seen a bear in over a year here at Tettegouche. I need to spend more time in the campgrounds apparently ;-)
Ranger Gary, Tettegouche State Park.

If I remember right, those Cart-in campgrounds have bearproof lockers, if only messy people could be organized like that.

It seems to me that campers should be aware of bears regardless of where they stay in northern Minnesota. Granted, some locations are more bear prone than others, but it seems to be a given. Even as far south as Pine County, bears are something to be aware of. I've always been amazed with how careless campers can be surrounding this issue - this seems especially true in state park campgrounds.

Pity to hear of the generally poor experience described here. Personally, I prefer to stay at the nearby state forest campgrounds when visiting Tettegouche (a stunning and diverse park by the way). Both the Finland and Eckbeck sites are quite nice. The Finland campground is definitely the place to go if a quieter experience is the goal. The campground was sitting at around 1/2 capacity when I drove in this past Sunday afternoon to get a site for the evening. I don't think that could be said for any of the north shore SP campgrounds! So, for $12, I was able to have a virtually silent night of sleep. What did I loose out on in the deal? A shower and a 7ish mile drive from the park visitor center. A worthwhile compromise in my opinion.

I.traveled to nearby Gooseberry Falls sometime in Mid Oct. 2003: As a trip by myself from Ohio to Minnesota . I was late for the color change and endured 3-4 inches of snow as I traveled.through Duluth that weekend. What is a Cart In campsite and What.are.the differences between those and other sites in MN State Parks?

This is such an informative post. You have a lot of really great points. I wish I had this post as a resource when I started blogging.
Camping Tents.

I've stayed here for 3 days now. The most beautiful campsite I've ever been to. (I won't say which one)I brought my 10 year old daughter. From our site, we could climb down a 20 foot ledge to our private beach. A little highway noise if the waves arnt crashing. But they usually are. We booked a trip back here for next year and might try to pack a little lighter next time. Having our bikes with really helped getting around.