Pincushion Mountain: Through the woods darkly 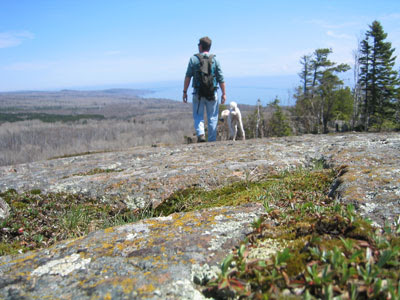 The poodle and I made it to the top of Pincushion Mountain the other day. The dramatic clarity of the views and the bare rock on top were quite a contrast with the abstract experience of the river below.

We hiked up the Devil Track River on the Superior Hiking Trail. The gorge of the Devil Track river is supposedly the deepest in Minnesota. The trail climbs faster than the river bed, so the gorge gets deeper and deeper as we went. It is so deep, in fact, that as the SHT runs along the edge of the gorge, you seldom can even see the river or its waterfalls. The river was loud with spring run-off, so I knew it was there. But even at the official Barrier Falls Overlook, here's the best picture I could get of the falls: 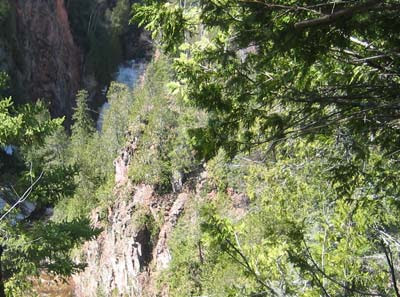 Maybe it's a Cubist hike. You have to experience the gorge and the river from many angles before you really get the full picture of it. To hike along and finally descend into the gorge, to feel the air freshen and chill, and cross the raging river, to smell its full spring redolence, to hear the roar come and go as the terrain changes and soundlines change...all that comes together for an complete, and wondrous, experience of the river and gorge.

It made me think of the blind men and the elephant: each person has an incomplete and imperfect sense, but put them all together and you can understand.

So when we approached the summit of Pincushion, it was like taking off the blinders or stepping out of the cave. Here's Chloe on the ascent: 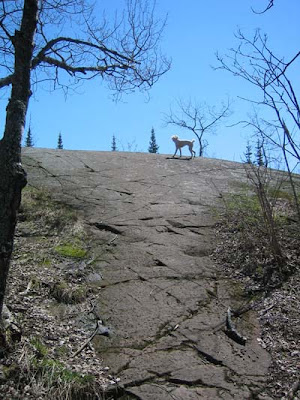 I enjoy a bit of Cubism. I really enjoyed hiking up the Devil Track gorge, experiencing through different angles, though I was frustrated with the lack of a great view of the falls.

My heart soared though when we got up on top and in the open, with the broad Lake Superior views.

According to Wikipedia, Through A Glass Darkly is "an abbreviated form of a much-quoted phrase from the Christian New Testament in 1 Corinthians 13. The phrase is interpreted to mean that humans have an imperfect perception of reality."

Yeah, my perception was imperfect down below. But up on top of Pincushion, with the poodle, under the bright blue sky and looking out over bright blue Lake Superior, reality was perfectly perceived.
Posted by Andrew Slade at 11:34 AM

I'm inclined to believe we have an imperfect perception of poodles, too.

I have been trying to get a perception of the puppy from different angles, but he keeps slurping me.

What sort of dog do you get when you cross a poodle with Picasso?