The fatal draw of waterfalls

Gooseberry Falls State Park was crawling with people today. For a Monday in May that was not Memorial Day, that's unusual. The weather was fine: sunny and warm, with a persistent strong wind.

After hiking the park's Hiking Club Trail, I wanted to check out the Middle Falls and a memorial I'd read about.

Richard Paul Luetmers had died here over 30 years ago. He would have been 46 today, just about my age. Here's the memorial: 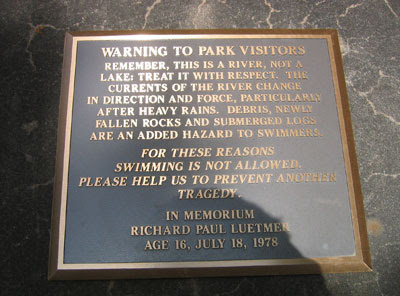 This plaque is about ten yards away from the upper edge of Middle Falls. Park staff hoped this somber message would discourage others from jumping or swimming here. It didn't work. Five years later, almost to the day, Robert Maxwell of Illinois jumped off the falls, hit a rock ledge in shallow water, and died. The day after that, park staff kicked 20 more swimmers out of the falls. In July 1999, Allan Johnson, a 20-year-old from Baxter, MN, joined the fatality list in this same place.

I continued past the memorial to the falls, sat on the exposed bedrock, and took another picture: 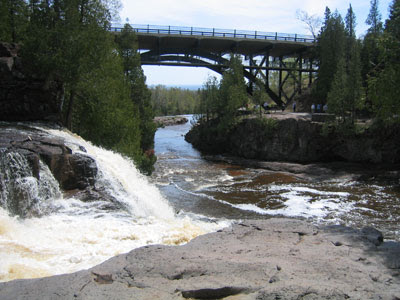 And then more people came to the falls. From my left, a teenage boy in bare feet, his pants rolled up, was walking tenderly down the rocky stream above the falls, toward the crest. A father came in with his two young children. Both the teenager and the dad had friends across the gorge, with cameras. For a brief moment, both teenager and toddlers were posing on the lip of the falls. 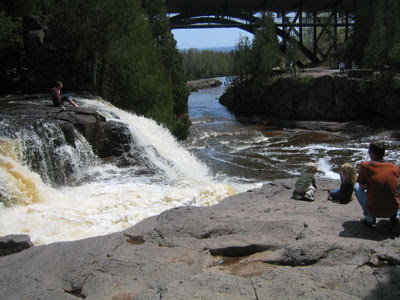 Father, son and daughter got out fine. The kids did not somersault over the edge to their doom. The teenager tenderfooted back up the rapids to dry land, his whole escapade videotaped (of course) by a friend.

Not everyone dies when they do this. 99.99% of them survive. But why do people risk it? Teenage boys I understand, but the kids were just being camera fodder, like having honey smeared on their cheeks for a bear to lick off.

Get out there, experience the wild. There are better, safer ways to feel that risk of death without actually risking your death.
Posted by Andrew Slade at 7:51 PM